SLiCK were invited in mid November to the Pivotal event at the Cambridge Museum of Technology. Watching the forecast we confirmed attendance a few days ahead, not knowing what the expect. It turned out to be a sunny Autumn day.

The venue was an atmospheric Victorian pumping station on the River Cam. 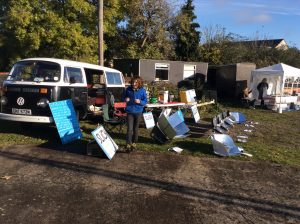 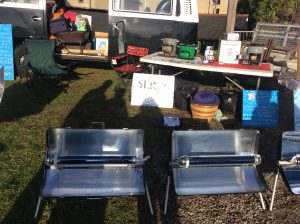 Our ‘solar cooking window’ was short with solar mid-day around 11:00am and low sun angles. I’d no experience of doing a demo at this time of year and like most solar cooks I’m still finding my way about. Hungry for sunbeams I set up early. Look at those shadows!

It was pretty cold, around 6°C – much of the event was held indoors in the museum or its out-buildings. Outside we had a great spot with direct sun. Solar cookers take time to warm up, unlike powerful fossil fuel using devices. I also needed a warm up and was grateful for my small display of rocket cookstoves, keeping an Ecozoom Versa on all the time. Combined with the sunshine and the warm reception, this kept things very pleasant indeed! 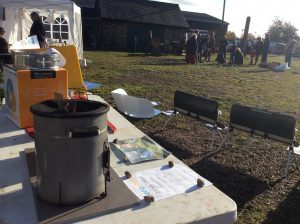 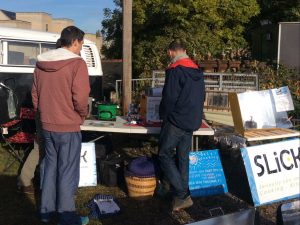 I’d pre-made some bhajis/pakoras to reheat in the evacuated tube cookers ( SLiCK SM70’s)  and handed these out to visitors, careful not to lose too much heat as the spicy smell wafted around. I was also able to display a number of panel cookers in operation, (the best operation was the Lightoven), and my old faithful the Sun Oven, which after strong use for years is looking battered, but still heating up nicely.

The solar cookers need regular aiming in winter, the suns position changes fast in the sky, as the earth rotates. I also had to watch out for shadows sneaking in, as the sun dipped at noon.

Visitors were very interested indeed, the majority having never seeing a solar cooker before. People twigged to the idea of using a fireless cooker with a rocket stove and a solar cooker in combination. This allows 24 hour low impact, zero fossil fuel options for cooking.

Were not trying to say we should do this at all times, but we can work together to raise awareness of options for direct solar cooking whenever possible, off grid, in the garden, wherever. By doing this we’re encouraging uptake elsewhere in the world, amongst those who have little choice but to burn wood from endangered forests. Event attendees were highly aware of these and other environmental issues.

So close to mid-winter (5 weeks hence) and at 52°N it was for me a great opportunity to demonstrate the suns power and to counter the often heard fallacy that solar cooking isn’t possible in the UK. If I can do this in November, summer will be a scorcher!

Our thanks to the people of Cambridge and those who set up a great event. Hope its sunny next year too!

Join the discussion on the Facebook group – Solar Cooking UK