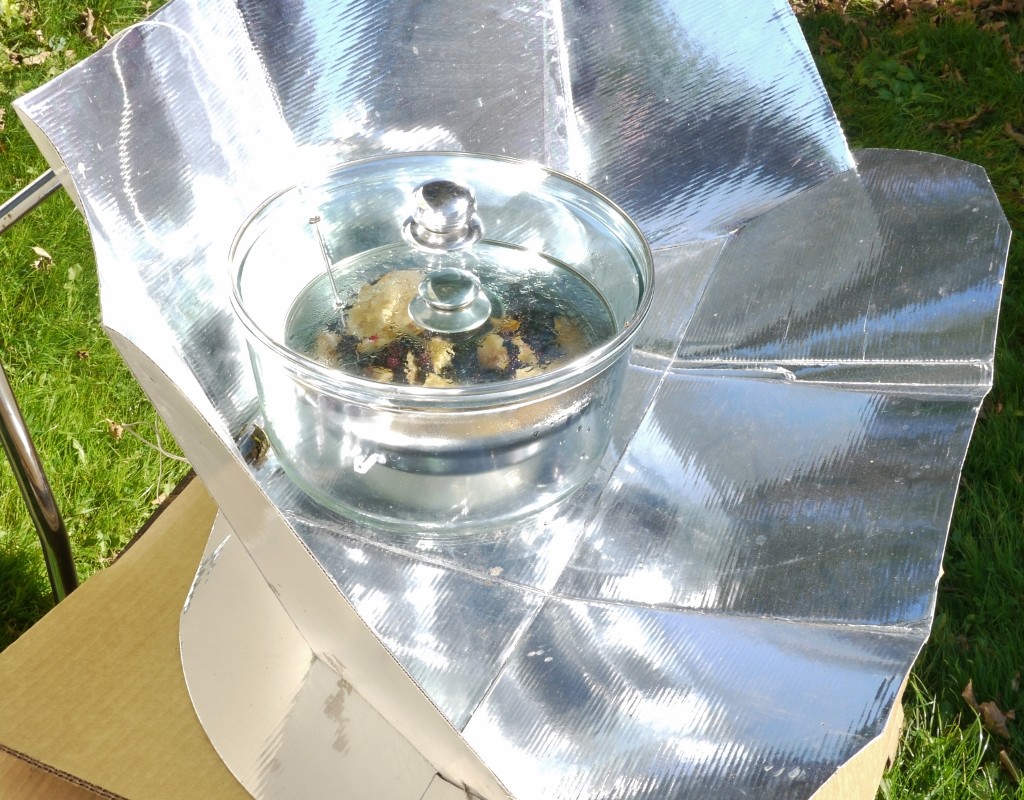 Explore Solar Cooking in the UK

Great for off grid, education and camping use

Folds away to store during winter

The SLiCK CooKit Solar Panel Cooker is a good entry point for solar cooking in the UK. They are inexpensive, and fold quickly for easy storage. Cooking pots must be black or dark in colour, and pots should have a reasonably tight lid.  A microwave bag (included) will cover most pots and this serves to keep more of the sun’s heat in your pot. Success depends on the type and amount of food cooked, and the number of sunshine hours. It’s possible to get cooking pot temperatures above 100C, but you will probably see a maximum of around 95C most of the year in the UK. Maintained for three to five hours, this is easily hot enough to cook vegetables and even tenderise tough cuts of meat in the same manner as an electric slow cooker.

A CooKit can be one component of an ‘Integrated Cooking Approach’ (see our article on Integrated Cooking on the resources page) Combined use of a rocket stove, a solar cooker, and a ‘wonder bag’ or ‘hay box’ (fireless cooker) can seriously reduce your fossil fuel consumption.

A CooKit can also provide batches of warm water for washing up, It will easily heat water to 60C on a sunny day – hot enough to scald you – be careful.

With a CooKit, best results are achieved between the equinoxes, but we have used them to cook well into October – see our Blog.

If looked after, they will last you for several summers. When completely exhausted they make a great template for making as many as you like. Make sure that you protect yours from rain, though, as they have a cardboard backing.

We can recommend the CooKit as an educational tool and a good introduction to solar cooking. Solar cooking is in its infancy in the UK, so your use of a CooKit will raise consciousness of low carbon cooking, and provide a hands-on demonstration of the greenhouse effect, and the amount of power available from the sun.  You can explore your own Solar Cooker recipes, or copy ours.

Note: The Solar Panel Cooker does not include the grill trivet or glass bowl shown or cooking pots. Collect your own pots which need to be black, black cooking silicon works very well too.